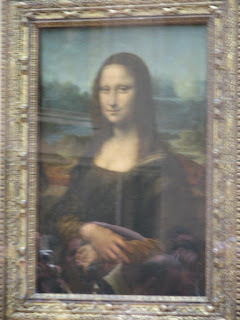 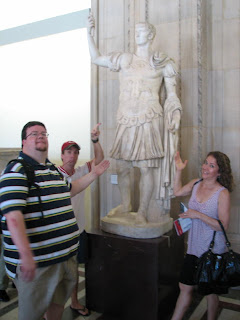 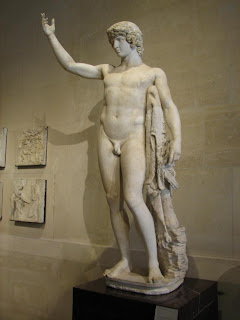 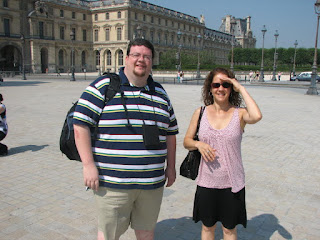 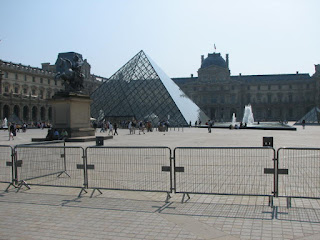 After eating breakfast at the hotel, we met up with Sparky and Tim to visit the Louvre and other historic destinations. I was at the Louvre in 1985 with my High School Jazz band on a trip to Europe, but didn't remember much and had since lost most of the pictures taken... although the French people were much friendlier this go-round, I still am not crazy about Paris. It's another big city similar to New York / L.A. in many respects, but certainly worth a visit if you've never been.

Seeing amazing works of art from centuries past, eating lunch at the cafeteria and checking out the gift shop, Anna and I decided to part ways with Tim and Sparky so we could walk to Notre Dame. This was easily a 3 mile hike, but well worth it. We wound around the old streets and stayed off the main roads... finally feeling like we were in Europe and not N.Y.!

We stopped off at a street cafe (one of the thousands) for a beer and a slice of tort so we could officially use the restrooms. There is a charge if you are not a customer... well worth the very needed break!

We decided after giving our feet a break and getting a little bit more energy that we should venture in to Notre Dame! There was a service under way with a female Cantor with an angelic voice! VERY haunting - yet beautiful! We were captivated!

Since the Sgt. Recruiter area was somewhat familiar, we decided to walk back down that way to window shop a bit. Anna found a Parisian designer store with a purse that even I have to admit was way cool! The owner of the shop spoke some English and was very friendly... offered advice on where to eat that wasn't going to break us nor poison us with dirty bathwater like the previous night!

Upon catching the last train back to our hotel, we ran in to a group from Temple Jazz Orchestra and they told me about a jazz jam just around the corner... so I hurried and grabbed my horn! Tim Cates, Sparky Thomason, Dave Wild, Ben Irom, Vince Bryce and myself all got a chance to jam with the locals at a place called "The Cave". A cool little underground dive!!! What a treat!
Posted by Keith Fiala at 6:58 AM