The Trumpet in Lucern, Switzerland! 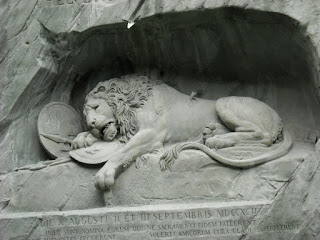 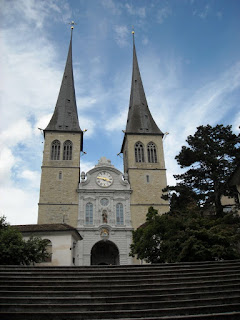 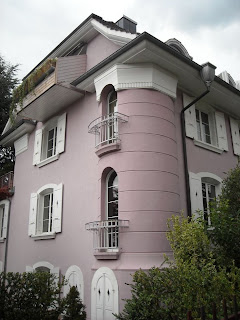 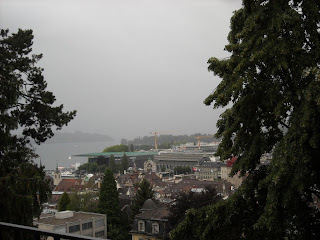 We were only able to spend one night in Grindelwald - which was sad to say the least, but we are now heading in to 2 days off in Lucern. Neither of us have ever been, but we hear that it's gorgeous!!!

Upon first arriving, each new place feels overwhelming... not from the hustle and bustle of traffic or people going by, but more from all the sites and sounds to take in at once. Lucern is certainly no exception! Once settled in to the hotel, we decided to put on our walking shoes again and start hiking... we were literally just a block away from the river and the bridge that separates the town. On the other side of the river was a shopping area... outdoor mall European style! Just beyond that was neighborhoods... so we could see things through the eyes of the locals and not just another pair of American tourists.

We stumbled upon a music store nestled in the heart of the shopping area - as Anna was still on a good running shoe quest. All the shoes that she liked were nearly twice what we could get them for at home... all the ones on sale that she liked were "near" her size but not quite. We stopped in to the music store to investigate this horn - upon closer inspection and speaking to one of the shop keep's, the horn is Swiss made... called Spiri. Interestingly enough, it has a detachable bell, lead-pipe, and tuning slide that can all be purchased. Different bell flares, smaller lead pipes, and a "D" style tuning slide could all be purchased in addition to the horn as it comes from the factory. I was invited to play the horn - but being without my mouthpiece, I opted to wait until tomorrow morning...

As we walked, we noticed that no one seemed to be stressed, in a hurry, pissed off, etc. It was really nice to be in a relaxed environment and still be in a city.

Once again, pictures just do NO JUSTICE to the place itself, but we have experienced some amazing sites! One of the city's monuments is a lion that has been carved into the face of a rock wall that was once a gravel pit by an Italian artist that was commissioned by Lucerne to carve out this life like sculpture. If you look closely, you can see the broken spear in the lion's side!
Posted by Keith Fiala at 7:22 AM